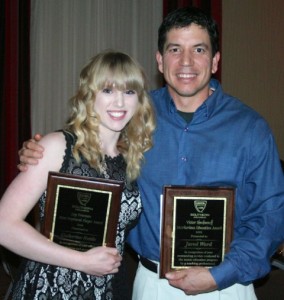 Just wanted to give a shout out to our two award winners in OTA!  At the Arkansas Awards Banquet, players/coaches were recognized from all over the state. Catherine Nettle, otherwise known as EC (Extra Credit), received the Jay Freeman Most Improved Player Award from the Arkansas Tennis Association.  It could not have gone to a better recipient, as she continually puts in the time, hard work, and focused dedication to take her game to the next level.

Also, our own Jared Ward received the Victor Sheshunoff Award, which is given for outstanding contributions to teaching in Arkansas.  For those of you that really know Jared, he would rather be known for being a quality teacher than anything else!  Adding that to having been named Arkansas USPTA Pro of the Year, Arkansas Southern Cup Coach for 5 straight years, and this year selected to serve on the Southern Section Coaches Commission, he is really racking up the hardware when it comes to recognition in the State and in the South.  I would say you guys have put your kids’ tennis in the right hands!  Jared doesn’t like to send these kind of things about himself…but I do!

For 12 years now, he has dedicated a lot of time and energy in doing the best job that he possibly can for his players, and for tennis in general.   He really deserves a “job well done.”

We are always striving to learn more, do better, and execute with a greater accuracy — so hopefully we will only continue to see more OTA players and coaches recognized for their efforts in the future.

Thank you for being part of our OTA family!
Christy Ward