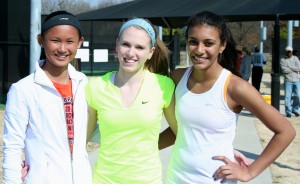 Well, the Spring Swing is in the books, and a huge thank you to all of our OTA players who participated!!  Despite the rain, we ended up getting all of the singles draws finished, and a few of the doubles as well.  We really appreciate all of you, and the patience you displayed with us as we worked to get the schedule tweaked to accommodate the rain.

As many of you know, we rarely do round-ups after Arkansas district tournaments, other than the Qualifier and Closed.  Often our focus in OTA is on how we compete with the state, and even more on how we compete against the South and beyond.  But it can be a point of pride with our players, and this one merits a little attention.  You’ll see why.  Whether you played or not, we want all of our players to know how we are doing as a group, and to take pride in being part of the OTA family!

But, before we get into the results, we wanted to commend the group on what was the best part of the weekend – our attitude, effort, and fighting spirit was so impressive!  We put this first, because with everything else we’re about to report, we are most proud of who you are as people.  We are happy for you because you won so much… we are proud of you for the way you represented yourselves, your families, and OTA.  Thank you!!

All of the results are listed below, but the quick version is this: OTA won EVERY SINGLE OPEN DIVISION!!!  Not only that, we placed 1st AND 2nd in 5 of the 9 singles divisions… over half!  That is an unprecedented result in a tournament with 131 participants.  And while results are not the only measuring stick of our success as a program, we hope that these serve as a validation of all of your hard work, and hopefully inspire you to continue – or even raise – your current efforts.

So, well done, OTA – both during this weekend, and in the weeks and months of preparation that made it possible.  We are looking forward to a great spring, and appreciate the opportunity to work with all of you… Go OTA!!!!

Only a handful of doubles draws finished.  Here is how OTA did: